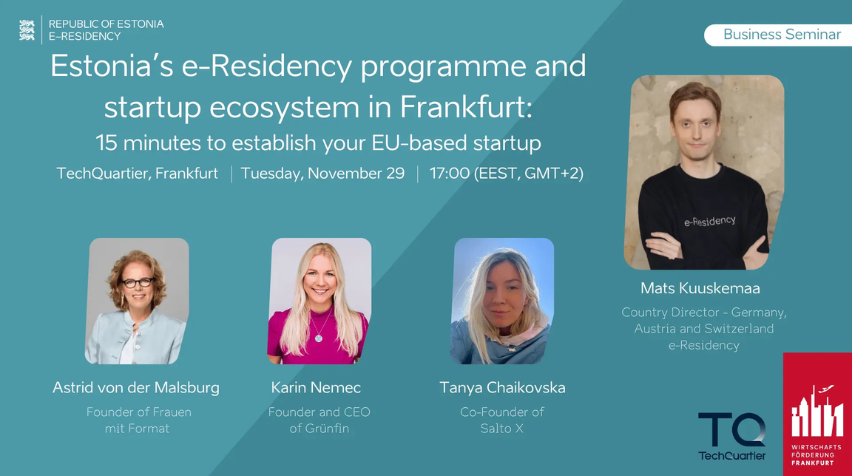 How do the Frankfurt-Rhine-Main area and Estonia differ as ecosystems? How can both complement each other? Find out how Estonia’s e-Residency empowers entrepreneurs worldwide and in Germany. With over 96,000 entrepreneurs, freelancers and founders having joined e-Residency, the programme allows to establish and run EU-based businesses 100% online and remotely. Recently, Estonia broke the world record for the fastest company establishment with 15 minutes and 33 seconds. The programme has also brought more diversity to Estonia’s startup ecosystem which has thus far produced 10 unicorns ($1 bn valuation) companies.

The event is organized in collaboration between Frankfurt Economic Development, the Government of Estonia’s e-Residency programme, Estonia’s Honorary Consulate in Hesse and Rheinland-Palatinate and TechQuartier.

Join us for a discussion, networking, food and drinks on Tuesday 29 November at TechQuartier Waldstadion!

Astrid von der Malsburg · Founder of Frauen mit Format and Estonia’s Honorary Consul in Hesse and Rhineland-Palatinate as well as an e-Resident founder.